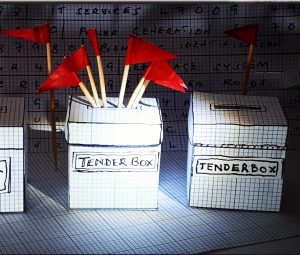 Most anti-corruption interventions are small-scale and targeted. Hence, there is a risk that they simply displace corruption rather than reducing it as corrupt actors adapt to the new conditions. Direct attempts at improving corruption controls in one area might elicit two evasive tactics: corrupt actors could shift focus to areas with weaker controls or could more aggressively exploit the loopholes that remain. Observing such displacement effects requires an overview of a whole system and detailed data points within it, hence we focus on the procurement process which is highly regulated and structured yet also prone to corrupt manipulations. We analyse a dataset of World Bank-funded development aid tenders over two decades in >100 developing countries. With data points from multiple stages of the procurement process and key outcomes, we observe the heterogeneous effects of a 2003 anticorruption reform aimed at increasing oversight and opening up competition. Our tight matching estimations suggest that the reform is effective in a direct sense: it decreases corruption risks due to low competition (the share of single bidding falls from 22% to18%). But evasive tactics largely cancel out these positive direct effects: buyers switch to non-treated non-competitive procedure types (whose share increases from 7% to 10%) and exploit them more intensively. Overall, foreign companies lose out: their market share drops by 2 percentage points.